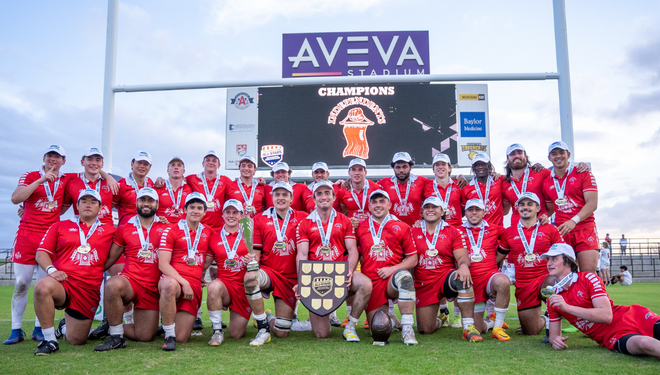 The title defense wasn’t perfect for the Independents, who were upset in their final pool match of day one, falling to the Great Lakes Thunderbirds, 22-9. And their quarterfinal against the Southeast wasn’t much easier, as they trailed the Bears into the second half, but went on a run and held on late to win 15-12.

The Independents (Red) trailed again early in the semifinals, 3-0 to their cohorts, the Independents (White), who knocked off the Midwest Barbarians, 15-12, in the quarterfinals. Stashing some starters for the final, the Red team had to pull out all the stops to advance past the White team.

The Grizzlies, however, were unbeaten until the final, sweeping Pool B with double-digit victories throughout group play. The Mid-Atlantic was no match in the quarterfinals, either. The Sharks drew first blood, but the Grizzlies reeled off four-straight tries en route to a 29-12 victory.

They, too, had a tough semifinal, from which the Pacific West emerged 12-0 winners over the Great Lakes, scoring one try on either side of halftime. The first from a driving maul off a point-blank lineout, Humboldt hooker Jason Uipi dotting down, and the second after a long break from Grady Pope off a midfield lineout.

The final was all one-way traffic, though, with the Independents racing out to a 25-0 first-half lead and never looking back. Reed Santos opened their account with a penalty in the seventh minute, followed by a drop goal from Victor Gourdon. Dartmouth duo Matias Calvo and Matt Anticev scored the opening tries of the match, with Northeastern lock Charlie Beney dotting down just before halftime.

The Great Lakes Thunderbirds emerged champions of the Rising Stars competition, featuring five of the All-Star sides’ young up-and-comers. Through round-robin play, the Great Lakes posted a 3-1 record, the lone loss coming in their tournament opener to the Foundry, 19-17. The Thunderbirds reeled off four-straight wins, including the final, a 24-8 avenging of the loss to Tri-State, to take the crown. Thomas More and Great Lakes back Rafael O’Gorman was named Rising Stars MVP.