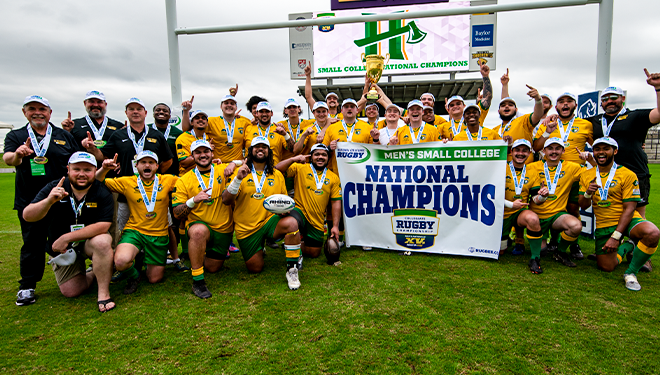 Indiscipline from Principia gave IUP some early scoring opportunities in the DII final, but the Crimson Hawks missed their first two shots at goal before Tyler Johnson slotted IUP’s third penalty attempt to establish a 3-0 lead. The high-powered Thunder Chickens didn’t spring free for their first score until 22 minutes in, when Celino Peterson squeezed off an impressive offload at the try line.

Johnson slotted two more penalties for IUP to keep the Crimson Hawks within striking distance well into the second half, but seven Principia tries eventually broke the levy. Thunder Chicken scrumhalf Damilola Odunuga was outstanding in the win, setting up multiple tries with kick passes.

In the Small College final, The LumberJacks jumped out to a 15-0 lead on the back of two tries and a penalty. They’d hold previously unbeaten Wayne State scoreless for the first 56 minutes. The Wildcats were just inches from scoring off a charged down kick deep in their try zone, but the Jacks barely won the race to the ball.

Wayne’s climb to a comeback got significantly steeper when tighthead prop Jon Mueller was sent off with a red card for a dangerous tackle 10 minutes into the second half. The Wildcats finally broke the scoring seal a few minutes later via a penalty from flyhalf Vuyo Mdlalose.

Lock Logan McDaniel punched over a pick-and-go try from a meter out to extend the Jacks’ lead to 20-3. Wayne State managed tries in the 67th and 79th minutes to draw within a score with just seconds left, but Humboldt held on to hoist the Cohen Cup.