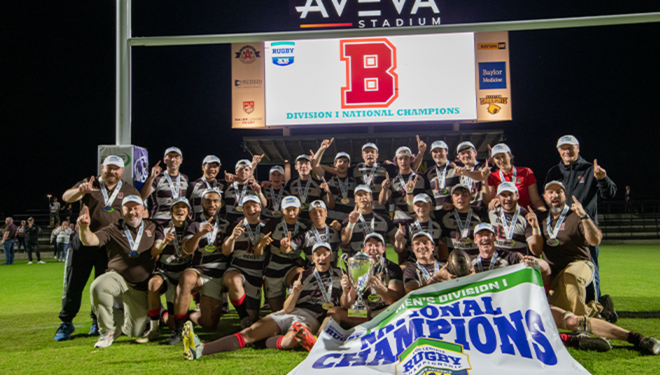 In the first action of the day at Houston’s AVEVA Stadium, Sam Houston State proved too much for Southern Nazarene, winning the Lonestar Bowl 56-24. Bearkat center Jake Stockley was a terror all afternoon, slicing through the Crimson Storm defense seemingly at will.

In the second bowl matchup, Notre Dame shutout Boise State 31-0. The Irish took a 17-0 lead into the halftime break and didn’t relent in the second stanza. Senior center Sean Moran proved too a live wire for the Bronco defense, scoring and setting up his teammates regularly.

In the DI-AA final, the cardiac Cardinals of Louisville nearly repeated their semifinal feat of winning on the last play of the game. The Hokies and Cards traded barbs the entire contest, swapping tries in the first half, but Virginia Tech converted one more kick, taking a 12-10 lead into the break.

The only two-score lead of the match was created in the 68th minute by VT, but Louisville cut the difference to 24-22 in the 75th minute. The Hokies held on to turn back the late comeback bid. Tech flyhalf and assistant coach Fernando Anduaga was instrumental in the win, dotting down twice.

Brown never trailed in the DI final, riding a dominant scrum to a 10-0 halftime lead. Flyhalf Raphael Lansonneur slotted the first points of the game via a penalty, and the second score was a penalty try, awarded after the Bears’ scrum overpowered Queens’ scrum. Queens was severely hamstrung by a first-half red card to No. 8 Haydon Johson for a dangerous tackle.

The Royals struck first in the second half for a bit of momentum, but Lansonneur added a penalty to make it a two-score lead once more early in the second half. In the 68th minute, the Bears mauled over their second try of the game to sound the death knell and cap off an undefeated season.