All Eyes on Houston for Men’s Championship Weekend 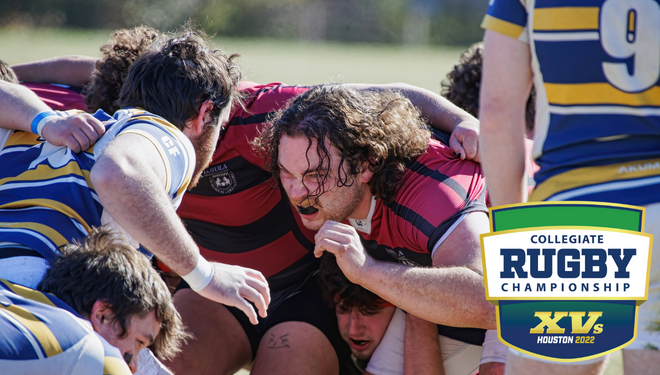 All eyes are on Houston this weekend, as four national champions will be crowned at AVEVA Stadium. In Division I, will Queens or Brown emerge as the new kings after the Bears blitzed the defending champs in the semifinals? In DI-AA, Virginia Tech looks to stave off surging Louisville to go back-to-back. And in Division II and Small College, all comers have their sights set on favorites Principia and Wayne State, respectively.

Division I
Top-ranked and undefeated Brown (12-0) is seeking its first-ever national title, with 2019 DII champion Queens standing in the way. Brown punched its ticket to the final by knocking out defending champion St. Bonaventure, 14-9, in a heavyweight slugfest last weekend in Reading, PA, where Queens also dismantled Thomas More 37-19.

In the Royals’ convincing win, senior flyhalf Thomas Keay scored two tries in addition to opening up opportunities for teammates with his excellent passing and play making ability. Crafty fullback Roman Denevi also scored a brace in the semifinals. In the scrum, prop Marshall Frank and blindside flanker Prince Louis-Bush are forces to be reckoned with.

Brown overcame a yellow card to fell the Bonnies last weekend, their overbearing set pieces suffocating the defending champs. St. Bonaventure was knocking on the door with ball-in-hand late, but a determined and timely Bear defense turned back the comeback bid. All American lock Ollie Corbett was impressive as usual, charging down an exit kick for one of Brown’s tries. All-American prop Daniel Archer anchored the dominant scrum, and No. 8 Antonio Esteves opened holes with big carries from the base.

Division I-AA
Virginia Tech is the lone defending champion still standing, advancing to Saturday’s final with a nail biting 17-15 win over St. Joe’s last weekend in Reading, PA. The Hokies staved off a late comeback bid from the Hawks to punch their ticket to Houston, St. Joe’s scoring two tries in the final 10 minutes.

No. 8 Hunter Denesi leads the Hokie forwards with his powerful running from the base of the scrum, but also his booming leg from tee and for touch. The potent wing duo of Will Richey and Chance Church will be looking to attack the wide areas with speed, and potentially run under an up-and-under from flyhalf and assistant coach Fernando Anduaga.

Louisville needed late-game heroics to end Binghamton’s Cinderella run in the other semifinal last weekend. The Bearcats twice had the ball with the lead in the waning minutes, kicking it away to the Cardinals. Louisville made them pay on their methodical last possession, scoring a walk-off try in the 83rd minute.

Parker Anderson and Jacob Kinsey have led the Cardinal forwards this year, as both have been regulars on the Man of the Match list. Hooker Angelo Eklou is another key cog up front, and flyhalf Aaron Stevenson and center AJ Ayres do a lot of the damage out wide.

Top-ranked Principia has been dominant in its first season under head coach Philip Kellerman, with an average score of 81-11 in nine wins against DII opponents. The lowest offensive output the Thunderchickens managed en route to their Gateway Conference title was the 54 points they hung on Maryville. Principia is loaded with talent, but a couple of standouts are sophomore stepper Celino Peterson and flyhalf Bradley Mayekiso.

Awaiting the Thunderchickens are the white-hot Ramblers of Loyola, who after finishing third in the Great Midwest have reeled off back-to-back wins to reach the final four. Filippo Chiaramondia is one of a handful of veterans who were on Loyola’s pre-COVID playoff side in 2019. The young team has benefitted throughout the season from the maturation of talented freshmen like scrumhalf Ben Payne and center Declan Heffernan.

The IUP Crimson Hawks are trying to win a second national title in a calendar year, having claimed the DII crown at the Collegiate Rugby Championship 7s in New Orleans in May. The Crimson Hawks advanced to the semifinals with a 27-24 victory over Vermont, their closest contest in their 12-0 campaign thus far. Scrumhalf RJ Beach and fullback Brian Arnold are playmakers.

North Carolina State is vying for its second DII national title. The Wolfpack won it all in 2018, and they return to the final four for the first time since after a 60-19 win over Virginia in the round of 16 and a 19-17 defeat of Norwich in the quarterfinals. The backline is paced by the playmaking trio of scrumhalf Craig Jablonski, fullback Evan Thomas and flayhalf Tom Hyong, who has the ability to put the ball wherever he wants with his boot.

Small College
The long and winding chase for the Cohen Cup, the Small College national championship trophy named for National Collegiate Rugby’s founder, Steve Cohen, enters its final turn this weekend. With about 200 teams vying for the shiny goblet from the start of the season, Men’s Small College is by far the largest division in college rugby, boasting a 30-team playoff bracket.

Undefeated and No. 3 Wayne State enters the final weekend as the highest-ranked team left in the hunt. The Wildcats have been dominant all fall, posting five shutouts in 15 wins. Vuyo Mdlalose can line up anywhere in the backline, but usually at flyhalf or 15. He is exceptionally skilled and elusive, as is fellow sophomore flanker Mpumelelo Mathias, as well as physical.

Awaiting Wayne State in the final four is Mid-Atlantic champion Catholic, which sits undefeated at 9-0. The Cardinals have found themselves on the right side of three competitive knockout matches this postseason, defeating Widener 34-26 in the opening round, then Sewanee 34-25 and Susquehanna 41-39 to advance to Houston. Catholic is led by president and tighthead prop Ethan Ghostlaw and captain and No. 8 John Walsh.

The other semifinal pits Cal Poly Humboldt against Endicott, whose women’s team just claimed a national championship Sunday in Houston. Humboldt emerged from the West Region to reach the semifinals, beating Colorado School of Mines 32-7 and Western Oregon 51-17. Jason Uipi is a standout at scrumhalf, and junior prop Logan Zampa is a talented transfer from Napa Valley College, having played on the Northern California Pelicans in the NCR All-Star Championships in January.

Endicott needed every bit of magic to reach the semifinals, edging Maine 15-13 in their regional final. The last push came in the form of a Graham Lynch penalty kick with no time on the clock to send the Gulls to the final four. Endicott comes to Houston a perfect 10-0, piling on the tries throughout the season. Jordan Chappell is one of the Gulls’ top performers, and Teyshawn Jackson has scored more than his fair share as well.