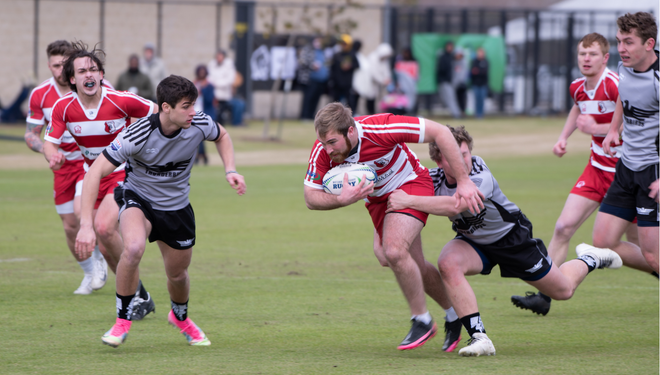 The Men’s National Shield Challenge kicks off this weekend at AVEVA Stadium in Houston, Texas. More than 300 players representing 105 colleges from 34 states split among 13 teams will clash in 30 matches Saturday and Sunday, hoping to catch the eye of All-American selectors and pro scouts.

The Great Lakes Thunderbirds, with players representing schools in Ohio, Kentucky, Michigan and West Virginia, are paired in Pool A with the Mid-Atlantic Sharks, New England Independents (Red), and Midwest Barbarians. In Pool B are the Southeast Bears, New England’s second side (White), the Pacific West Grizzlies, and the Tri-State Foundry.

Pool play will be conducted Saturday, with the top two teams from each advancing to Sunday’s semifinals, and the bottom four moving onto a consolation bracket. In addition, five of the regions are fielding a side in the Rising Stars competition designed for underclassmen.

Lifting the New England Independents over Pacific West in last year’s final was Dartmouth flyhalf Mike Weir, whose accurate boot punished the indiscipline of the Grizzlies en route to an 18-8 victory. For the Pacific West, back-to-back defending champions, it was a dethroning.

Last year’s All Star class produced numerous players selected in Major League Rugby’s Collegiate Draft, including the first two scrumhalves to come off the board in the second-overall pick Sebastiano Villani and seventh-overall pick Kekoa Kauwe. The halfback duel was on full display when Kutztown’s Kauwe lined up for the Mid-Atlantic Sharks and St. Bonaventure’s Villani for Tri-State.