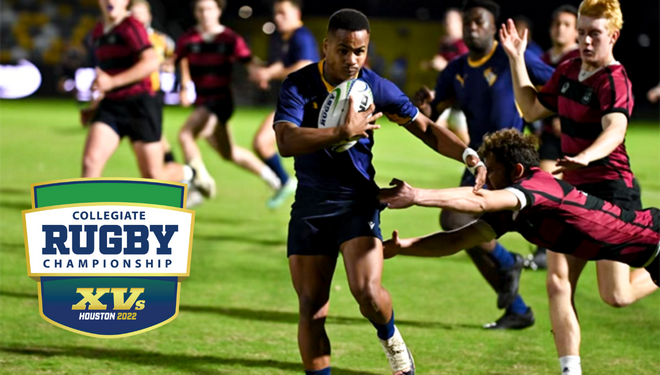 Day 1 of the Men’s Collegiate Rugby Championship XVs is in the books, with four teams surviving Friday’s Small College and Division II semifinals with championship hopes still intact. After a day of rest, Wayne State College and Cal Poly Humboldt will retake Houston’s AVEVA Stadium to play for the Small College title Sunday, as will Principia and Loyola Chicago for the DII crown.

Despite conceding three yellow cards, including one the opening minute of the match, the Principia Thunder Chickens were dominant in their 52-14 win over Loyola. Fullback Matoka Matoka and wing Celino Peterson proved especially untackleable for the Ramblers, both running in multiple scores. To the credit of Loyola, 52 points is the least Principia has scored in any match this season.

Indiana University of Pennsylvania had to work a little harder for its 12-5 victory over North Carolina State, and the win didn’t come without a cost, as standout scrumhalf RJ Beach was lost to a leg injury in the closing minutes. NC State opened scoring off a storming counter ruck deep in the IUP end, and the Crimson Hawks scored the next two to hold at 12-5 most of the second half. The Wolfpack appeared to regain the lead in the final minutes of the match, but fullback Tom Hoyng’s apparent try was deemed foul play, drawing a yellow card instead of level. NC State picked up another sin bin, playing the waning moments down two men.

In the opening Small College semifinal, Cal Poly Humboldt staved off a surging Endicott to advance, 41-28. The LumberJacks jumped out to a 19-0 lead, but the Gulls stormed back with a flurry of converted tries to lead 21-19 after 35 minutes. Hooker Jason Uipi punched one through just before the halftime hooter to give Humboldt a 24-21 lead going into the break. The Jacks opened the second half just like the first, with three consecutive tries, icing the win.

Awaiting them in the final are the undefeated Wayne State Wildcats, who bested Catholic 25-12 in the other semifinal. Flyhalf Vuyo Mdlalose opened the scoring for Wayne with a penalty kick in the 12th minute, followed by tries from outside center TD Letsoalo and lock Seth Vallance. The Cardinals struck back through hooker Lucas Mayer, but three successive tries from Wayne put the game out of reach.